STOP AND SEARCH: Excuse me- what happened to our civil liberties? 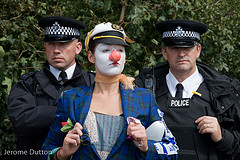 In mid January I moved from Bristol to London to live with my grandmother and focus on finishing my dissertation, which is looking into the effect that heavy automobile traffic on residential streets has on people’s social lives and quality of life. As a result, I won’t be posting here as often as I’d like to in the coming months…

Anyway, the other day, she took a train to Paris for the day to see a friend, and asked me to drive her car and pick her up in the evening (I’ve driven more in the past two weeks than I have in the past two years- it’s absolutely horrible driving in London but it is a great help to my grandmother). She’s almost eighty years old and it’s becoming harder for her to get around by walking and public transport- even though she lives near a bus stop and a tube station. She is part of the first generation of adults who have been motorised during their whole adult lives to get old enough where driving is becoming unsafe. It’s not an easy transition—I’m trying to show her how to order her groceries online as a way to reduce her need to drive.

Spending time with her, however, has reminded me how cars really can be a great help to those who are disabled or mobility impaired- so the question is why are we wasting limited carbon emissions on those of us still able to get around by biking or walking, getting fat and ruining urban livability in the process?

Anyway, I drove to St. Pancras station to pick her up, and was early so I decided to park the car and go check out the new station. There I was waiting for her at the arrivals gate, when two policemen came up to me and told me they were going to carry out a “random” search on me under the 2000 Terrorism Act. Obviously it wasn’t random as I was the only person not dressed in a black suit and tie standing there. The “No Third Runway” badge couldn’t have helped either. Anyway, they asked me a bunch of personal questions that I answered, forgetting what I had learned at Climate Camp in August that you don’t actually have to tell them anything unless they arrest you. They quickly established that I was no security threat, but continued to search every nook and cranny of my bag, clearly looking for drugs.

I had no contraband on me, so they then gave me a “receipt” that spells out the legislation that gives them this power, and basically the law is that a cop can search your vehicle or your person whenever and wherever they feel like it, without any cause whatsoever .

I can understand the need to carry out random searches at high threat locations to dissuade potential suicide bombers, but using this law to carry out detailed searches that are clearly intended to bust people for small scale drug possession is clearly a breach of the intent of the law, and an opportunistic and scary expansion of police powers. Eerily reminiscent of the patriot act in the states, but there is no constitution here guaranteeing freedom from warrantless search and seizure.

This is a law that I’ve read about over the past few months, but to be the target of this Orwellian expansion of police powers was a wake up call that we’re living under a system that is beginning to border on fascism– a western world where governments and police forces are bracing to protect the status quo from widespread protests over climate change and globalization. The time to stop this attack on our civil liberties is now, before they get out of control.

Read more about this issue and take action here

One response to “STOP AND SEARCH: Excuse me- what happened to our civil liberties?”